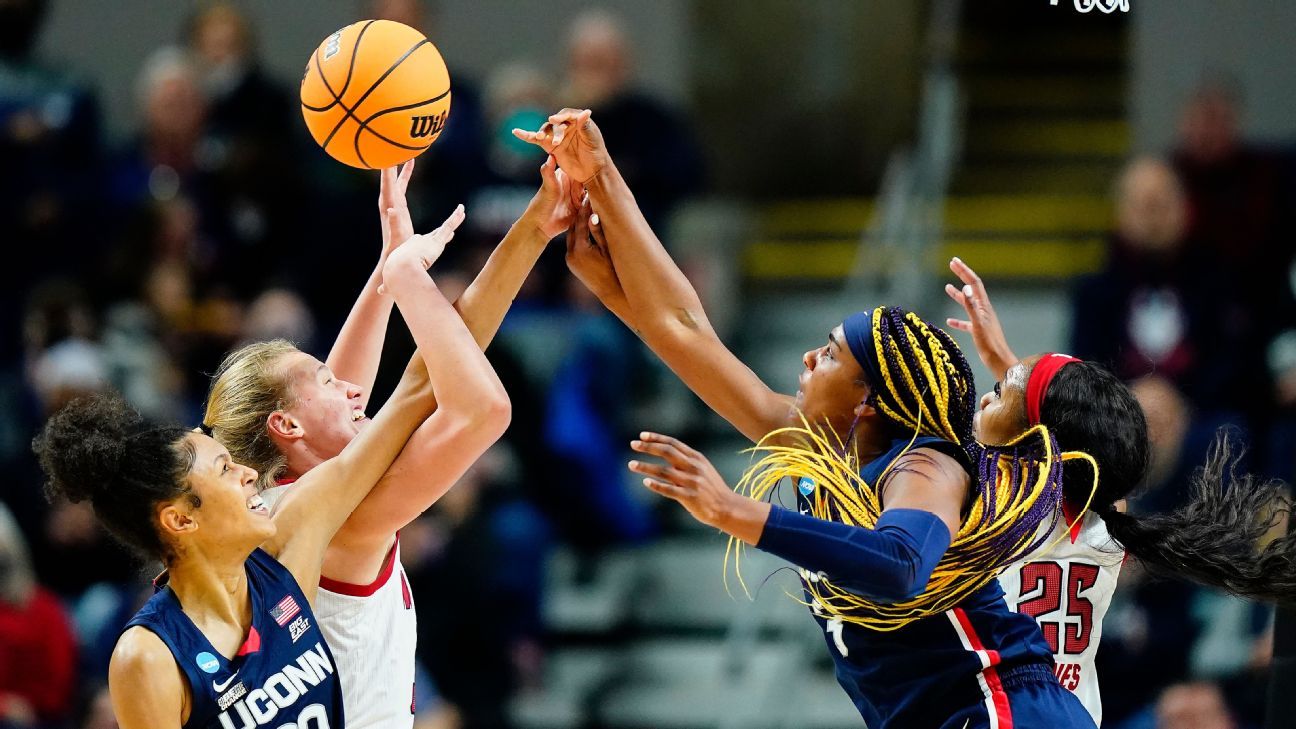 BRIDGEPORT, Conn. — By the time the first overtime tipped off Monday night in the Bridgeport Regional final of the 2022 women’s NCAA tournament, the game was already an instant classic.

Never mind that the No. 1 seed NC State Wolfpack and second-seeded UConn would play 10 more minutes before the Huskies sealed a trip to the Final Four with a 91-87 double-overtime victory.

The two teams had battled all night, UConn seeking its 14th consecutive trip to the national semifinals, NC State chasing its first Final Four since 1998.

It all added up to one spectacular game: Two overtimes. Thirteen lead changes. Nine ties. The crowd at Total Mortgage Arena roaring all night as the teams traded baskets.

The details made this the game of the women’s NCAA tournament so far. Even as upsets dominated the first two rounds and two 10-seeds made it to the Sweet 16, this was the game that captured the epitome of March Madness: Two heavyweights battling for the opportunity to make it to Minneapolis and compete for the national championship.

Complete your bracket by selecting the winner for each game of the women’s NCAA tournament. Play Tournament Challenge

This was a game where UConn was a four-point favorite over the region’s top seed largely because this game was in Bridgeport, Connecticut, a stone’s throw from the UConn campus in Storrs. Vivid Seats’ Fan Forecast estimated that 84% of the crowd was cheering for UConn, and each time the crowd cheered following a key basket or a forced turnover, the noise felt like it exploded in your chest.

But this was also a game where no matter whose side you were on, you could feel your heart beat in your ears and a lump rested right at the top of your throat. Because there were stakes. UConn hadn’t missed a Final Four since 2009, and NC State hadn’t been in 24 years. The Wolfpack had been eliminated in three consecutive Sweet 16s. Even as upbeat music pumped through the speakers, the crowd barely clapped along. Because who could clap in rhythm during a time like this?

This was a game where if you thought it was over, you were wrong. UConn got out to an early 10-point lead, but then NC State looked like it was going to repeat its Sweet 16 victory over Notre Dame by rallying to take a late lead. Then UConn looked like it had the game in the bag … until NC State’s Jakia Brown-Turner hit a corner 3 with less than a second on the clock to send it into a second overtime.

This was a game where big-time players stepped up in big moments. UConn sophomore Paige Bueckers — the reigning national player of the year who missed 19 games with a knee injury and only returned Feb. Ela 25 – ela hit the opening basket of the second overtime, a pull-up 3-pointer from the top of the key, and followed it with a leaning pull-up jumper just inside the arc the next possession. And with the season on the line for NC State, trailing by five, Kai Crutchfield aka “Clutchfield” hit her second 3-pointer of the extra periods to pull NC State within two with 3:03 left in the game.

This was a game where newcomers seized the moment. UConn freshman Azzi Fudd poured in 19 points, but shined when the spotlight was at its brightest. With the clock waning in the fourth quarter, Fudd was there to chip in a bucket when UConn needed it. And with the Huskies up by one with less than a minute left in the game, Fudd drove to the right, sucked in the NC State defense, and, as she fell back on her heels, dished the ball to sophomore Aaliyah Edwards, who laid it in to extend UConn’s lead.

Christyn Williams scores in the final seconds of double overtime as UConn survives against NC State to reach its 14th straight Final Four.

This was a game where everyone put their bodies on the line. The two teams battled in the paint all night, where UConn scored 40 points and NC State had 44. The sounds of jerseys and skin and sweat sliding against the hardwood were the beats underneath the cacophony of cheers and whistles. When senior guard Evina Westbrook found herself stuck with an unfavorable matchup in the lane, she stretched her fingertips to tip the ball to a teammate. And anyone who was on the block or trying to move through the lane was a human pinball. Cutters beware.

This was a game everyone deserved to win. As the time went to zero and Bueckers — a Minnesota native who finished with a game-high 27 points — screamed in triumph to the crowd, the Wolfpack huddled on the sideline before walking off the court, four of them for presumably the last time in college, as their small section of fans proudly held the Wolfpack sign in the air. Sporting their celebratory caps and shirts, the Huskies were crowned regional champions. The region’s Most Outstanding Player, Bueckers hit the dance known as the Griddy as her teammates bathed her in a confetti shower.

But as the players embraced one another and their families, and the remaining crowd clamored for photos and autographs, one thing was clear.

This was a game to remember.